Mim and Mikey really like a game of Zombicide. So naturally given some of the adventures that the crew of the Coldfire’s Mercy have been on; it made sense to make up some Zombicide Invader character cards for them. So using the majestic artwork of Kim Kogut, please enjoy and potentially kill the heroes of the Coldfire Chronicles. 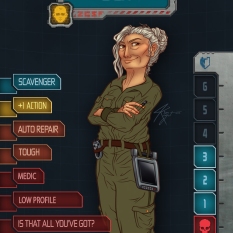 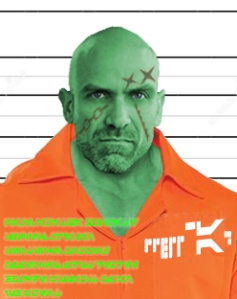 Identifying marks: like all Mirialans, Agatha wears facial tattoos representing his history. In particular: twin stars above his right eye, signifying his birthworld and clan, a thin chain beside his eye signifying duties and debts, and a serrated blade down the cheekbone signifying a violent adolescence.

Predictable behaviour: Agatha is a former mob enforcer, eager to supply muscle to a paying employer. He likes to pick fights, particularly against something bigger, so he can mark his skin with the ‘glories’ of his victories. Since his arrest, Agatha has been unable to access the necessary implements to mark his face with a tattoo signifying the crime he’s been locked up for.

Do not be complacent with this prisoner.

Prisoner statement: Agatha killed Wookie. You should run. You run away now.